This photo and the following information was submitted by Tim Walls who is a member of Phillips Family Group 10. 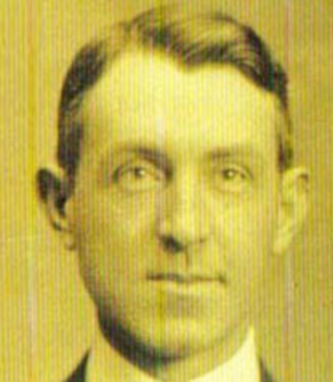 "Uncle Pete" as Harvey B. Walls was called by his nephew (my dad, John Walls), was born June 8, 1882 in Henry County, IN.
On March 24, 1894 Knightstown Friends Church, of Knightstown, Henry Co., IN received into membership on certificate from Duck Creek MM, [in the town of Greensboro,] Henry County, IN William F. Walls and wife Josie E. and children (Harvey and Mary).
When Harvey married Blanche Hunt, daughter of Sarah Holmes and George Hunt,  in 1903 he was listed as an electrician on the marriage application.
On March 23, 1916, Harvey was granted leave to join the Methodist Evangelical Church Knightstown. (source: Knightstown-Raysville Friends Meeting minutes)
(3.23.1916 Harvey glt ME Church Knightstown)

Harvey worked for his father, William Franklin Walls, in a car agency in Knightstown. The Walls moved to Putnam County, Indiana, where in 1930, Harvey worked as a manager at the telephone company. They returned to Knightstown in retirement (presumably sometime