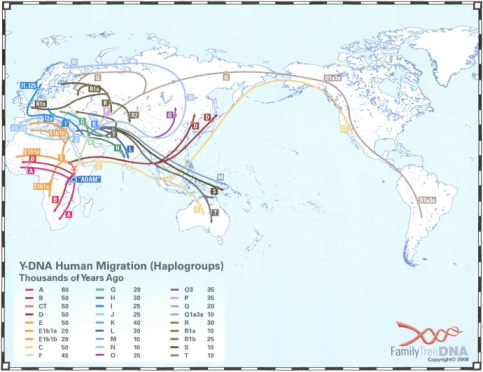 Haplogroups can be used to trace the path of man's migration around the world since his origination in Africa.  As man migrated, he adapted to his surroundings. These adaptations can be seen in the lightened skin color due to the lack of sun away from the equator, stockier build as observed in peoples in the Arctic regions to maintain body-heat, and better oxygen absorption capability as seen in inhabitants of mountainous, oxygen-poor regions.

Another common term used in genetics is haplotype. If you can imagine a haplogroup as the branch of a tree, a haplotype is an individual leaf on that branch. Because some haplotypes are found to be more common within particular haplogroups, it is very often possible to make a prediction of what your haplogroup is from your haplotype.

Haplogroups allow genealogists to gain some insight into their very 'deep' ancestry – i.e. information about their direct paternal or maternal ancestors who lived thousands of years ago.