Before talking about autosomal DNA (also known as atDNA) for use in genealogy, it is important to understand more about atDNA and its function in a person's total DNA.  Understanding this information and what atDNA can and can't tell you will help in determining your choices if you decide to pursue atDNA genetic testing.

Autosomal DNA testing for genealogy at the current time is controversial, expensive, complicated and less informative than yDNA and mtDNA testing.  Currently, autosomal DNA can only tell us about our recent genetic past and our deep ancestry. Click here if you would like to learn more about atDNA in depth. 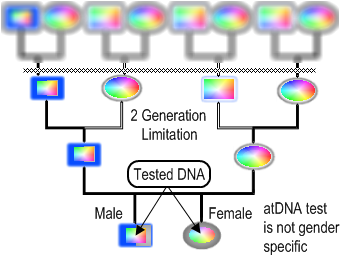 Right now there are two types of tests for atDNA for genealogical use; they are Codis and Biogeographical. Deciding on which company a person uses to test his or her atDNA depends on what type of information you are seeking. Codis results are a vague series of numbers that must be interpreted by a genetic professional.

The Codis test is the test used for paternity to prove close relationships (child to father and mother) or by police and forensic departments to prove uniqueness. One company claims to have a database with sufficient data to provide a snapshot of a person's ethnic heritage geographically based on Codis Results.

Biogeographical atDNA testing to determine genetic percentages of a person's ethnic ancestry from continental regions uses a mix of SNP's (single nucleotide polymorphisms) across a range of individual and family chromosomes. In the genome being analyzed, the chromosomes are compared with population databases. Depending on the testing company, the use of standard Codis markers combined population databases like OmniPop are used to identify test subject's percentages of Native American, Indo-European, East Asian or Sub-Saharan ancestry. The four biogeographical groups are defined and reported as a percentage of DNA make-up as follows:

Another biogeographical testing company professes to know what markers to test for ethnic background and a series anywhere from 500 to 1349 markers are tested. Some offer a more detailed test to determine regions of a continent a test subject appears through probability to have more relationship through atDNA. As of right now a more in-depth look at Indo-European or "European" ancestry is now being offered with a map showing probabilities of frequency of a test subject's atDNA geographically illustrated in Europe.

Making the Choice to take an atDNA Test

To make a final determination about atDNA testing, you must realize that at this time, atDNA can not be used for genealogy in the same way that yDNA and mtDNA can be used. Autosomal DNA testing is more for those who are trying to find clues to possible ethnic heritage.

As scientist Roberta Estes, has stated: "Clearly understand that the tribes [sic, DNA Tribes] information (as well as any other autosomal analysis information of this type) should be chocked up to the 'interesting' category, and little more until the underlying data bases and technology becomes significantly more robust."

Uses of atDNA and information on atDNA is changing rapidly as this type of testing becomes more developed. If you can add more or correct information that has changed, please use our contact form to notify the webmaster.