× Need help finding a living Phillips for DNA testing. Post some information on the family you are looking for.

They lived at 6 heol Rhian, Llanrhian, haverfordwest, Pembrokeshire, SA62 5BS in the 1950's and he married a lady named Gwen Rees, there was an article in the local newspaper on both Gwens death in 1959 and sadly a court case where George was prosecuted for child and animal cruelty within a year of his wifes death.

I would very much like to find more information as I have been unable to locate either his birth or death certificate being such a common name. 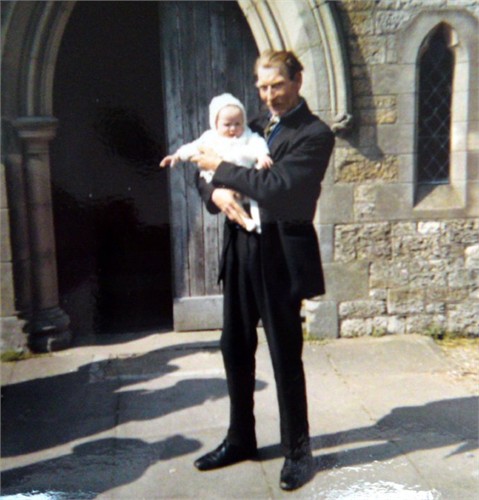 This is George Phillips and I at my christening in Littlehampton Sussex early 1973. I was told that he died a few years after this photo was taken.

Less More
12 Oct 2010 11:34 #77 by NancyKiser
Replied by NancyKiser on topic George Phillips
If you would like, I will post your message to a private British mail list. There are some real experts on that list who know a lot more about research in the UK than I do. I am sure someone on that list will be able to help.

Less More
13 Oct 2010 13:27 #79 by NancyKiser
Replied by NancyKiser on topic George Phillips
I tried to post your message on the British mail list but I was told by the moderator that I could not post a personal message from another person. I suggest that you go to rootschat and post the message for yourself. Rootschat is a British message board. Here is a link to it: www.rootschat.com/

Also, if you have a male Phillips relative who would agree to take a painless and private DNA test, you might be able to learn more about your Phillips family. We have about 40 British participants in the DNA project.

Less More
26 Jun 2012 07:37 #1019 by RRRensch
Replied by RRRensch on topic George Phillips
Good afternoon Young Lady
By accident have I come across this article.
I have further news about some aspects of your family which might interest you.
If you could email me - or find me on facebook or message on twitter - same (avatar)
All the Best
RRRensch